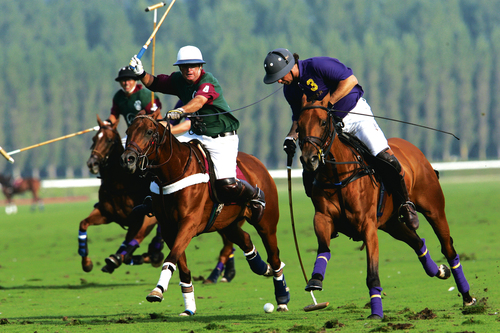 On a full sized grass field, each polo team has four people. In an enclosed arena usually played in winter, each team has three people.

The ground is 300 yards long, 160 yards wide if boarded. Being boarded means the field has a 12 inch upright board bounding the perimeter which stops the ball rolling out of play easily. If the ground is unboarded, it is 200 yards wide and marked with a white line. The goal posts, positioned at each end, are 8 yards apart.

Duration of the Play

The full game rules allow for 8 chukkas, but often in club matches 4 or 6 chukkas are played. Each chukka is timed to last 7 mins, then a bell is rung, but the game goes on until the ball goes out of play, or for another 30 secs when the bell is rung again, the chukka ends where the ball is. The clock is stopped between the umpire’s whistle to stop the play and the whistle to start play (e.g. ball out of play, foul etc.) There are intervals of 3 mins between chukkas and 5 mins at half time. Ends are changed at every goal scored – this has been found fairest when there is a wind.

Each polo player is handicapped (on a 4-6 chukka basis) from -2 up to 10 goals (the top professional players). The aggregate handicap of the four players in a team is the team handicap. e.g. if all players have a handicap of 2 goals each, the team handicap is 8 goals and is referred to as an ‘8 goal team’. In handicap polo tournaments , if both teams do not have an equal aggregate handicap, one team is given a number of goals start which is calculated as follows: the number of goals start is obtained by multiplying the difference between the two teams’ handicaps by the number of chukkas and dividing by 6, any fraction counting a half a goal.

Ponies can play two chukkas in an afternoon with a rest of at least one chukka in between. There is no limit to the height of ponies.

A player following the ball on its exact line has the ‘Right of Way’ over all other players. Any other player who crosses the player on the right of way close enough to be dangerous commits a foul. Penalties vary according to the degree of danger and closeness of the cross. No player may hook an opponent’s stick unless he is on the same side of the opponent’s pony as the ball. Dangerous play or rough handling is not allowed – a player may ride an opponent off, but must not charge in at an angle.

Captains of teams are the only players who can discuss questions arising during a game. No player shall appeal in any manner to the Umpire for fouls, but the Captain can discuss any matter with the Umpire.