The final of the C.V. Whitney Cup, the first leg of the inaugural Gauntlet of Polo™ saw Pilot capture the $125,000 prize in a commanding 13-6 victory over Las Monjitas at the International Polo Club Palm Beach.

Pilot held the upper hand throughout the game behind the efforts of Facundo and Gonzalito Pieres, producing an elite running and passing attack that left the Las Monjitas defence a step behind. A run of seven unanswered goals in the second half, including a perfect 7 for 7 shooting display for Pilot over the final three chukkas contributed to the convincing victory. With the possession battle in favour of Pilot, Las Monjitas had difficulties creating consistent scoring chances and failed to convert with accuracy, missing 11 of their first 12 shots in the game. Without an accurate counter-attack, Las Monjitas fell to the efficient play of Pilot, who claimed the seven-goal victory and the first of three tournaments in the Gauntlet of Polo™, keeping their hopes for the $1,000,000 prize alive.

Pilot’s strategy was apparent early in the game, with the interplay between brothers Facundo and Gonzalito Pieres working effectively against Las Monjitas. With Matias Gonzalez and Curtis Pilot, who was playing his first game of the tournament, working hard to block and provide space for the 9 and 10-goalers, Pilot produced a relentless attack. Facundo Pieres led the way offensively, scoring his second goal of the game in the second chukka, while setting Gonzalito Pieres up with an impressive backhand pass to extend Pilot’s lead to 4-2. Las Monjitas struggled to generate offense from the field, with their first half offense coming from the penalty line off the mallet of Francisco Elizalde. Converting just 1 of their 9 shot attempts over the first three chukkas, Las Monjitas was fortunate to be trailing by just two goals at halftime as Pilot held a 5-3 lead.

The continuous pressure of Pilot eventually wore down Las Monjitas as they dominated play in the fourth chukka, outscoring Las Monjitas 5-0 to build a seven-goal lead. Facundo and Gonzalito Pieres continued to execute a flawless two-man game, each scoring two goals while adding two assists to pace the Pilot offense. Already holding one yellow card, Hilario Ulloa was penalized with a second yellow in the chukka, leaving Las Monjitas a man short. The problems for Las Monjitas increased when Ulloa came on the field early, leading to a red card and forcing him from the final. Replacement Santiago Toccalino filled in admirably, but the loss of the 10-goaler for Las Monjitas proved to be another factor in a runaway game for Pilot. Two more goals for Facundo Pieres in the fifth chukka gave him a game high eight goals, with Pilot holding an impressive eight-goal advantage. With the victory already secured, Pilot conceded three goals to Las monjitas in the final chukka but celebrated the 13-6 victory and the C.V. Whitney Cup title. Matias Gonzalez was named MVP, while Facundo Pieres’ Open Pennsylvania claimed Best Playing Pony. 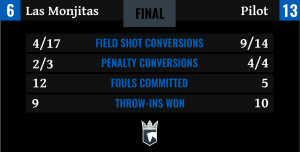