Opening weekend at the Santa Barbara Polo and Racquet Club kicked off with the first round of tournament play in the Folded Hill Pope Challenge. Out of the six teams entered, Antelope Jr. was the sole team to survive the weekend undefeated.

The second game of the day was a match-up for Farmers and Merchants Bank against Geoff Palmer’s Antelope Polo. Both teams were entering the field with a loss in their previous game, making a win on Sunday crucial. It was a very close game all the way through. Danny Walker was the highest scoring player on the field with five goals. It was a dramatic finish as Lucas Criado took the ball coast to coast to put the ball through the goal mouth just as the second horn blew. This final goal saved them from overtime and won the game for FMB, 10-9.

The featured match of Opening Day was between FMB Too! and Antelope Junior, two teams coming off of wins in the first round. However, FMB Too! featured a slightly different line up as an injured Henry Walker was replaced with Pepe Rodriguez rated at one goal. This replacement player allowed for FMB Too! to start the game with a one goal handicap. The teams battled back and forth with FMB Too! defending their one goal lead until the fifth chukker. Antelope Jr.’s Pipe Vercellino scored 5 goals from the penalty line before scoring Antelope Jr.’s first goal from the field in the fifth chukker. Grant Palmer scored a skillful goal from the field to allow his team to begin the final chukker up by one. FMB Too!’s Juan Monteverde and Santi Wulff both scored in the final chukker, but it was not enough to match the goals by the opposing Jimmy Wright and

Pipe Vercellino. Antelope Jr. narrowly defeated FMB Too! by one to secure their spot as the only remaining undefeated team in the tournament, 9-8. 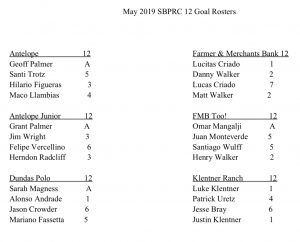