Now in its seventh year, the much competitive tournament will take place on Saturday, 22nd, and maintains the solid bonds between two of the most renowned polo clubs, Guards Polo Club, in England and La Aguada Polo Club, in Argentina. The two of them have been working close together for several years, organising tournaments in both countries.

The seventh edition of the Guards La Aguada Youth Tournament will have two of the Novillo Astrada brothers in attendance – Eduardo Jr. and Miguel, and the latter’s daughter, 18-years-old Mia, one of the rising stars of ladies polo, as well as La Aguada’s Polo Manager, Thomas Hume. With regards to the strong bonds between the two clubs, Mr. Hume stated that “throughout these seven years, we feel Guards Polo Club is like our home in England. At the same time, we are always happy to welcome Guards players and members at La Aguada every year, who also feel at home while in Argentina”.

Youngsters between 7 and 15-years-old will be playing the tournament, but it is not just about showing their powerful skills on the polo ground – the competition is also a fantastic opportunity to spend a great time at Guards Polo Club, in an event that combines two of the most remarkable values of polo – family and friends.

After the awards ceremony, and to end a great day of fun and polo, everybody will be very welcome to enjoy an exquisite asado at Guards Polo Club. We are very much looking forward to seeing you all! 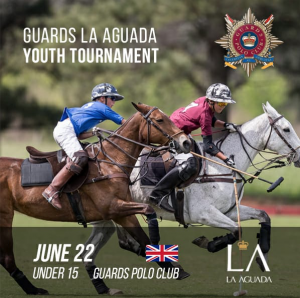