With rain postponing the Joe Barry Memorial final on Sunday, Beverly Polo and Patagones returned to action at the International Polo Club Palm Beach to determine the champion on Isla Carroll West. Worth the wait, Patagones captured the victory in dramatic fashion, claiming the 11-10 overtime victory on a golden goal from Tomas Garcia del Rio.

Both teams were unwilling to concede an inch in a closely matched final that resulted in goals being traded back and forth throughout the second half. A foul-ridden contest, Patagones’ Garcia del Rio and Beverly Polo’s Tolito Ocampo Jr. went head-to-head from the penalty line, but the difference in the match proved to be Patagones’ efficiency from the field as they took advantage of their opportunities around goal. In search of their second consecutive title to begin the season, Beverly Polo created more scoring chances but shot just 31% from the field, while Patagones converted 63% of their shots in what was ultimately the difference in the game. Despite an impressive nine-goal performance from Ocampo Jr. that helped send the game into overtime, Patagones’ Garcia del Rio sent the ball through the posts to secure the Joe Barry Memorial title.

Driving forward in the early stages of the game, Beverly Polo amassed nine shots through the first two chukkers but failed to find the goal on any of their attempts with their only goal coming from a Penalty 2 conversion from Ocampo Jr. Providing a quick response with a penalty goal of his own in the first chukker, Garcia del Rio began a stretch of five consecutive goals for Patagones that would carry into the third chukker. The umpire’s whistle continued to stop play and sending Garcia del Rio to the penalty line, as he added his fourth penalty goal to begin the third chukker and give Patagones the commanding 4-1 lead. Scoring the first field goal of the game, Santiago Wulff ended Patagones’ run of five unanswered goals, while Beverly Polo also ended their drought before halftime on Ocampo’s second goal of the match.

Trailing 5-2, Beverly Polo reorganized at halftime and focused on converting their opportunities around goal after a first half where they made just one of their 12 shot attempts. Relying on the play of tournament scoring leader Ocampo Jr., Beverly Polo quickly found their step in the fourth chukka, scoring four goals in quick succession to turn a three-goal deficit into a one-goal lead over a span of minutes. Ocampo Jr. contributed three goals, while assisting on a tally from Lucas Diaz Alberdi. 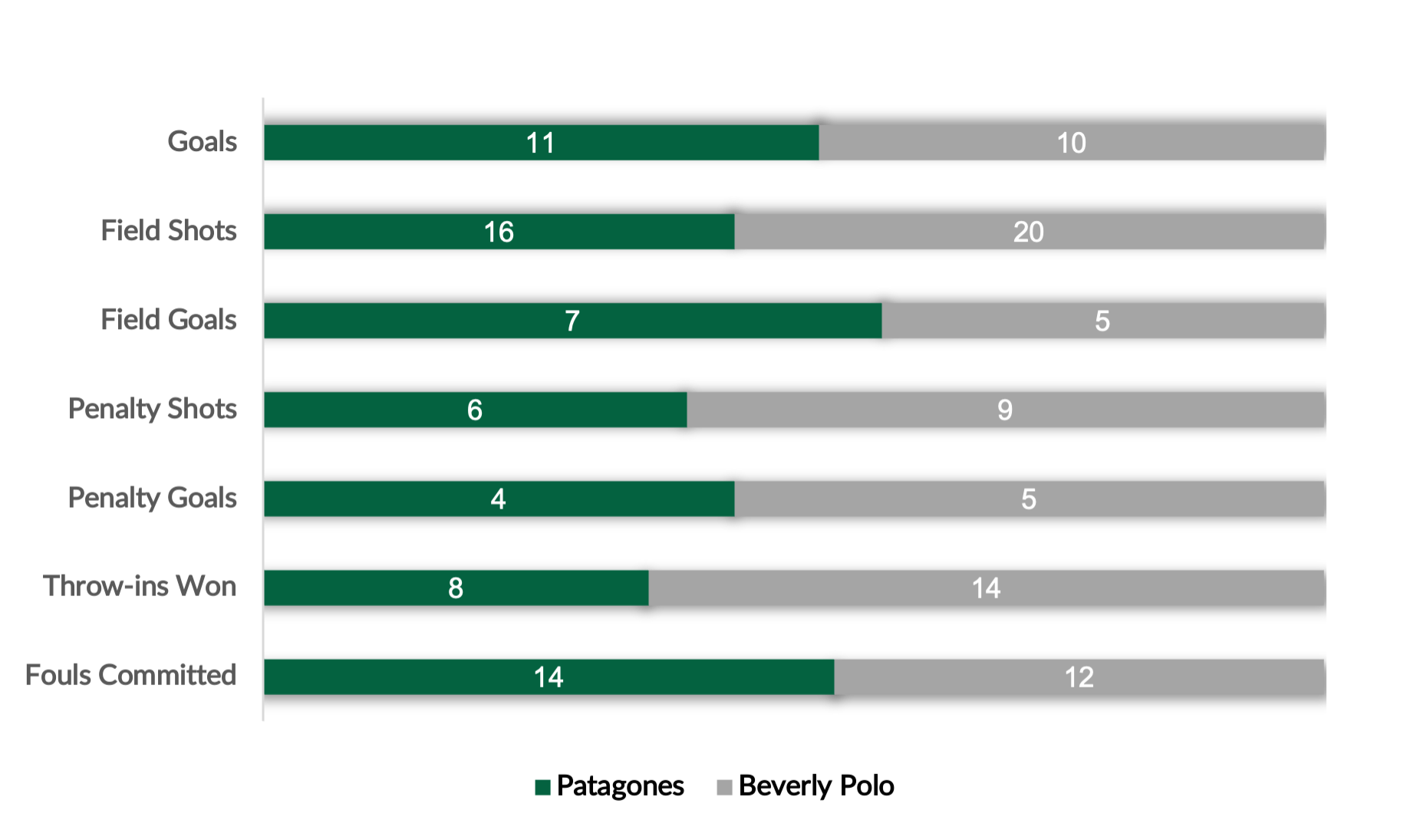 The pace increased after the stop and start first half resulting in thrilling polo and end-to-end action, yet the two teams remained tied with little room for error over the final two chukkers. Ocampo Jr. added two penalty conversions while Patagones excelled from the field, receiving one goal each from Joaquin Avendano, Garcia del Rio and Wulff leaving just seven minutes left to determine the champion. Ocampo Jr. struck first to give Beverly Polo the slim 10-9 advantage, but it was short-lived as Garcia del Rio added his seventh goal on the following play. In a crucial moment, a second yellow card sent Benjamin Avendano off the field for two minutes, but the Patagones defence stood tall, preventing a Beverly Polo goal, and sending the game into overtime.

Withstanding the early pressure from Beverly Polo, Patagones ran out the clock while having just three players on the field and with Benjamin Avendano returning, they began their attack downfield. Finding space, it was Garcia del Rio who claimed the golden goal, sending a shot through the goal to secure the thrilling 11-10 victory and claim the 2022 Joe Barry Memorial title. For his efforts, Garcia del Rio was named Most Valuable Player while Tunito, his 14-year-old Dark Bay Gelding claimed Best Playing Pony honors.