Team Lanson is the champion once again.

The number of spectators broke records on the beach of Hörnum

They have made it one more time. Team Lanson, including Thomas Winter and Christian Grimme, won the traditional Julius Baer Beach Polo World Cup on Sylt again. Under the bright blue sky of the North Sea the polo players from Hamburg stood up between all the teams. Umpire Sean Dayus from England: “We have witnessed extremely exciting, competitive and fair encounters. I am impressed by how much the players have fought. This is what polo should look like.”

Organiser Stephanie Schneider: “Everything was perfect today. Top-class sport, the location, the weather and a cheerful audience. The extremely positive feedback on both days was really overwhelming. This was the best edition of the tournament that we were ever able to organise.”

The matches were structured by a round-robin system (all teams take turns playing against each other). The winners emerged from the succession of goals per team and points for winning a match. Team König Pilsener, with René Kleinlugtenbelt from the Netherlands and the phenomenal playing Patrick Maleitzke, who was presented with the award as „Most Valuable Player“ of the tournament by La Martina, was placed second.

Third place went to the team of the title sponsor Julius Baer formed by crowd favourite Christopher “Niffy” Winter and Caspar Crasemann. Maserati with Marc Aberle and Tim Ward achieved the fourth position of the ranking, and team Pomellato / Windy consisting of Frank Kirschke and the Argentinian Agustín Kronhaus was placed fifth.

Heiko Schlag, Chairman of the board of Julius Baer Europe AG: “This edition of beach polo on Sylt is a joy for us. We have taken part of this as title sponsor for five years. The huge enthusiasm on the sidelines and a relaxed beach atmosphere is the perfect combination for proper island chukkas. Everything went well on this weekend. The audience was truly entertained by the matches and we have seen dynamic world-class sport. We are really glad that we have already signed the contract for the next Pentecost chukkas on Sylt in 2016.” Julius Baer wishes a very enthusiastic participation of the audience: The invitation to the tournament also included a section on polo knowledge and player backgrounds. The tournament program also included a polo guide twice per day, which explained of polo ponies, equipment and sport rules. This was a great and unforgettable experience for the spectators.

The interest of the media for Julius Baer Beach Polo World Cup Sylt was never as high as this year. Several television crews, radio broadcasting and nationwide daily newspapers reported on the event. German celebrities such as Verona and Franjo Pooth, as well as H.P. Baxxter, frontman of the band Scooter, model Petra van Bremen and several more gave the event a glamorous atmosphere.

An auction for a stylish E-BAYK was held and as in the past year a remarkable amount was paid for the bike. The proceeds of the auction will benefit the coast protection of Sylt. The E-BAYK was purchase by auction by the long-standing Sylt polo friend Ralph Justus Maus. The starting sum was once again donated by title sponsor Julius Baer, to support the auction for the coast protection of Sylt. 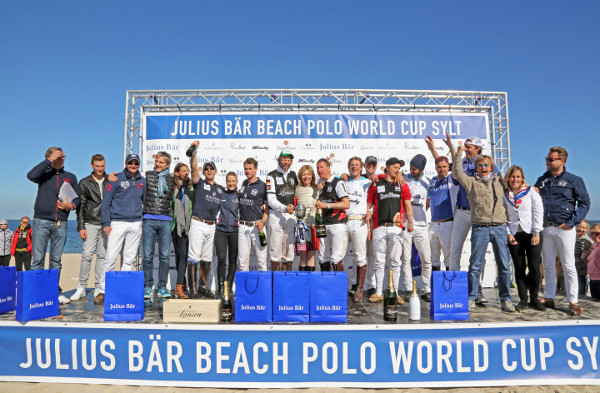