La Aguada will officially launch the brand new lineup, set to play the 2019 Argentine Triple Crown, the most coveted and prestigious polo competition worldwide, comprised by the Tortugas Open, Hurlingham Open and the Argentine Polo Open Championship, at Palermo. The press event will take place at La Aguada Polo Club, in Open Door, Argentina, on Thursday October 3, 2019 at 4pm.

The 32-goal lineup features Alejandro Novillo Astrada (8), Ignacio Novillo Astrada (9),  Alfredo Bigatti (8), and the new member, the young and talented Lucas Díaz Alberdi (7). Lucas, who is 23-years old and one of the biggest rising stars of polo, is the son of the former 9-goaler Alejandro Díaz Alberdi, who played with the Novillo Astrada brothers in La Cañada and La Aguada. Among other achievements, Lucas won the 2018 prestigious Copa Cámara de Diputados, with La Mancha Amadeus, and in 2019 he claimed all three tournaments of the 20-goal season in Palm Beach.

With regards to Miguel Novillo Astrada (8), he won’t be playing the Triple Crown, but he is currently playing the brand new new Xtreme Polo League, sponsored by the Argentine Polo Association, with a 31-goal La Aguada foursome, comprised by Victorino Ruiz (7), Alfredo Bigatti (8) and South African Nachi du Plessis (8).

KIA Argentina, the Korean worldwide renowned automobile manufacturer, will renew the partnership with La Aguada for the fourth consecutive year, and will provide the players with the brand’s finest products. Eduardo, Ignacio and Alejandro Novillo Astrada will drive a Sorento 4×4 CRDI apiece, while two Cerato will be available for Alfredo Bigatti and Lucas Díaz Alberdi.

2019 will be a special year for Río Uruguay Seguros.  The renowned insurance company is celebrating ten years of strong commitment alongside La Aguada and the Novillo Astrada family as their official insurance company.

Meanwhile New Balance will remain as the official provider, and the support of Ona Polo, LOGI Polo, La Chamiza and Stella Artois will continue thoroughout 2019.

The Novillo Astrada family is one of the most traditional names within polo, with 60 years on the polo grounds, both in Argentina and worldwide. La Aguada is currently one of the  most prestigious polo clubs, with polo for tastes and levels. Established in 1959, in Río Cuarto, Province of Córdoba, Argentina, by the founder of the dynasty, Don Julio Novillo Astrada – known as “Iaio” -, a very well-known 5-goal polo player and horse breeder, La Aguada is in their third generation of high goal polo players, and a fourth generation

Is already coming up, through Iaio’s great-great grandchildren.

La Aguada first steps in the Triple Crown in Argentina date back to the 80’s, through 9-goaler Eduardo (“Taio”), one of Don Julio’s two sons. Taio gave La Aguada its first title of the Triple Crown, as the winner of the Hurlingham Open, in 1986.

Years later, in 1990, Taio, along with his then teenage sons, Eduardo Jr., Miguel and Javier won the prestigious Copa República Argentina, a trophy Don Julio already won in 1946. It was the official presentation of the third generation of the family on the polo grounds in Argentina on a high level.. 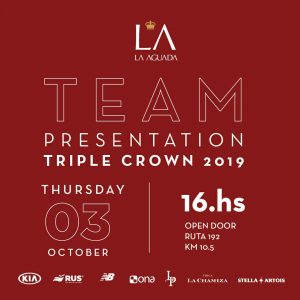