The semi-finals in the 2019 Copa de Plata produced two exciting games at Santa Maria Polo Club, with MB Polo capturing the first spot in the final after narrowly defeating Dos Lunas 10-9. The second semi-final saw Brunei remain as the lone undefeated team in the tournament after the 12-9 victory over Bardon.

In the opening semi-final, Dos Lunas raced out to a quick start due to early foul trouble from MB Polo, but throughout the match, possession was in favour of MB Polo, producing 20 shot attempts compared to just 11 for Dos Lunas. MB Polo battled back from the slow start to eventually claim the lead in the second half with a relentless offense that was led by four goals and two assists from Tomas Panelo to edge Dos Lunas by just one goal.

Building on their one-goal on handicap, Dos Lunas’ Joaquin Pittaluga converted consecutive penalty attempts to give his team the 3-0 lead inside the first three minutes of the game. MB Polo fought through their three first chukka fouls to cut the deficit to two, but Pascual Sainz de Vicuna’s goal to end the chukka gave Dos Lunas the 4-2 lead. A fast pace was set for the remainder of the half in end-to-end action that favoured MB Polo, who maintained possession and held Dos Lunas to just one goal over the second and third chukkas. Playing in place of Pablo MacDonough, Polito Pieres’ first goal of the game tied the game at 5-5 at halftime.

Producing five shots for the second consecutive chukka, MB Polo carried their momentum into the second half, claiming their first lead of the game after a field goal from Panelo to end the chukka gave MB Polo the 8-7 lead. With a spot in the final on the line, the game tightened over the final two chukkas, with limited opportunities for both teams as MB Polo protected their lead. After trading goals in the fifth chukka, the result came down to the final minutes after Pittaluga’s Penalty 2 conversion tied the game at 9-9. A quick response on the following throw-in from MB Polo saw Panelo find Pieres to restore the one-goal lead as time expired and MB Polo claimed the first spot in the finals.

Entering the second semi-final with a 4-0 record, Brunei were the favourites against Bardon, but ran into an organized Bardon team that provided difficulties up until the final chukka. With little separating the two teams, it was Brunei’s advantage from the penalty line, where Juan Martin Nero finished a perfect 5 for 5, that led Brunei to the victory.

With one goal on handicap, the potent Brunei offense was prevented from adding to their lead in the opening chukka, while Bardon took the lead on field goals from Rodrigo Andrade and Matias Machado. The momentum Bardon held in the first chukka disappeared in the following chukka due to foul trouble resulting in two Penalty 2 conversions for Nero. Adding two more goals from the field, Nero proved to be an offensive force, pushing Brunei into the slim 4-3 lead. Continuing to struggle with foul trouble, Bardon conceded two more penalty goals, but responded with a field goal from patron Andras Tombor to maintain the one-goal deficit at halftime.

A fourth lead change highlighted the beginning of the second half, with Bardon unwilling to let Brunei extend their lead and run away with the game. Taking advantage of each opportunity, Andrade and Santiago Laborde scored a goal each from the field on perfect 2 for 2 shooting, while Brunei was held without a field goal for the third time in four chukkas. That changed in a crucial fifth chukka, as Brunei kept Bardon pinned in their own half, winning all five throw-ins and outshooting their opponents 6-0. Three goals, two off the mallet of Camilo Castagnola gave Brunei a one-goal lead, with the exciting conclusion coming to the final chukka. Concluding an impressive performance from the penalty line, Nero scored his fifth penalty goal of the game to send Brunei into the finals, where they will meet MB Polo for the Copa de Plata title. 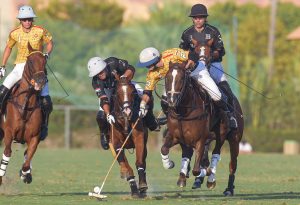