The British Open Polo Championship for the Cowdray Gold Cup kicked off on Tuesday 21st June with King Power and UAE battling for the Carlos Gracida Memorial Trophy, while Monterosso and Scone met in the second match of the opening day on the Lawns Ground.

A match of two halves, UAE raced out to a lead in the first half with a relentless attack, while King Power battled back over the final two chukkas. Conceding a Penalty 4 to King Power’s Nico Pieres in the opening minutes, UAE responded with a penalty conversion of their own, followed by the determined play of Bartolome Castagnola with two goals for an early 3-1 lead. Producing a strong defensive effort, UAE limited King Power to just one field goal on four shots for the remainder of the first half, allowing the 2021 finalist UAE team to expand their lead. Young Lucas Monteverde Jr. made his impact on the match with two goals and an assist to contribute to UAE’s 6-1 run to end the half ahead by four.

Pushing into the second half with the same strategy, an organized UAE defense continued to contain King Power while Tomas Beresford’s two goals in the fourth chukka left UAE in front by five with two chukkas remaining. In urgent need of offense, King Power exited the fourth chukka break with a renewed energy that resulted in four unanswered goals as part of a dominant fifth chukka. Two penalty conversions and a field goal for Pieres, along with the first goal from Top Srivaddhanaprabha instantly brought King Power within just one goal and creating a thrilling conclusion to the opening game of the tournament. Sending a Penalty 3 through the posts, Beresford provided some breathing room for UAE as they were minutes from victory. Despite conceding a goal to Mackenzie Weisz, UAE secured the victory when Monteverde Jr. sent the ball to goal where it was carried across the line by H.H. Sheika Maitha to claim the 10-8 victory and the Carlos Gracida Memorial trophy.

Moving to Lawns Ground 2, Scone Polo and their father-son duo of Adolfo and Poroto Cambiaso made their 2022 tournament debut against Monterosso, who added 9-goaler Pablo Mac Donough to their line-up. The high-scoring game needed overtime to determine the champion with each team generating offense from the penalty line for a combined 27 goals. Going the length of the field on a knock-in, a perfectly placed pass from Poroto Cambiaso set up a goal from Rosendo Torreguitar to open the scoring. Adding one more goal each, Poroto and Adolfo Cambiaso guided Scone Polo to a 3-0 start, but Monterosso’s Mac Donough hit a Penalty 2 through the goal to end the first chukka trailing by two. Exchanging penalty conversions throughout the rest of the first half, Poroto Cambiaso and Mac Donough led their respective teams with field goals difficult to come by. After Monterosso tied the score at 4-all, Scone Polo ended the half in the same way they began it, scoring three consecutive goals to hold the 7-4 advantage.

A torrid pace was set in the fourth chukka as the teams raced end-to-end, scoring three goals each to leave the difference unchanged on the scoreboard. Poroto Cambiaso continued to highlight the Scone Polo attack with his sixth and seventh goals, while Ignacio Toccalino moved forward in the game to give Monterosso their first momentum from the field. It carried into a decisive fifth chukka where Monterosso made their run to pull even. Holding the strong Scone Polo attack without a shot, Monterosso kept the ball in the attacking half and the result was three goals from Mac Donough and one from Toccalino as the two teams were deadlocked at 11-11 with one chukka remaining. A backhand from Matias Gonzalez sprung Toccalino on a breakaway which he confidently ran through the posts for Monterosso’s first lead of the match at 12-11 to begin the sixth chukka. Holding on to their one-goal lead into the final seconds, a foul sent Poroto Cambiaso to the 40-yard line with a chance to tie the game and he sent the ball through the defender to send the game into overtime. Running down the right side of the field, Adolfo Cambiaso drew a foul on an errant mallet, and it was son Poroto who converted the Penalty 2 to finish a perfect 9 for 9 and score his eleventh goal for the thrilling 14-13 victory. 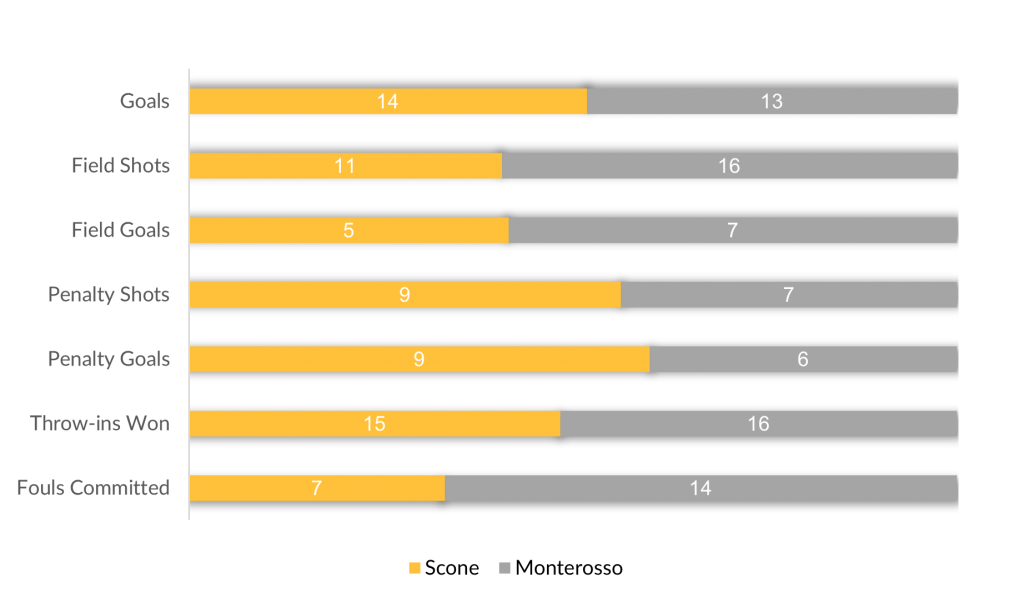