We are very sorry to inform you of the death on 15th November of Henry Stevens, a very popular figure at Cowdray Park Polo Club.

Henry was a gifted sportsman, and as a young man played 1st class rugby.  He had a couple of seasons playing rugby in Australia and on his return to the UK played for one of the country’s leading clubs – London Irish.  Watching both rugby and cricket remained a lifelong passion.

In the 1980s Henry opened what became a very successful nightclub, The Good Knight Club, in Haslemere, which attracted the local polo crowd.  The sport worked its magic on him and he learned to play – indeed, one night he ended up buying two polo ponies from one of his customers in the nightclub!  He enjoyed playing and took part in many of the Cowdray Park tournaments, also winning the Junior County Cup with Howard Taylor’s Whitehall team in 1994. Henry went on to become a successful umpire, working both in the UK and regularly in Europe where he several times umpired the Swiss Open, German Cup Open and Gold Cup Gstaad.

During the 1990s, Henry spent several seasons in California before moving with his partner Carol to Florida for the winter season.  Here he continued his passion for making and selling young thoroughbred ponies as well as umpiring.  Naturally, he kept the Cowdray contingent together during the winter both on and off the field with Julian Hipwood, Adrian Wade and Ray Fine all good friends.

In the UK ‘H’ made and sold polo ponies and could always be relied upon to offer good ponies for hire to professional players when they were short of a mount or two.  Having had polo yards at Lodsworth and Ambersham, he was most recently based at the Milford Havens’ Great Trippetts Farm.

With a wealth of polo knowledge, and more than a sufficient amount of charm, Henry was frequently called on by the club to entertain corporate marquee guests on Cowdray’s big days with his amusing  ‘Introduction to polo’ talks.  He remained a huge character at Cowdray Park and a constant presence in polo life.

Henry will be much missed by Carol and his family which includes his daughter Gaby, son Julian, their mother Jeannette, four grandchildren, and his many friends. 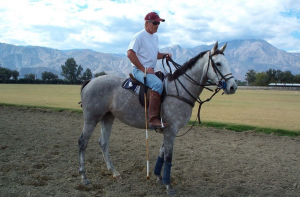