The 2021 UK high-goal season has kicked off with seven competitive days of play in the Justerini & Brooks Prince of Wales Trophy, concluding with the final between Thai Polo and Monterosso at the Royal County of Berkshire Polo Club on Saturday, May 29 at 3pm.

Through two rounds of league play, the level of competition highlighted the parity between the 12 teams as 50% of the games were decided by just one goal. Four teams remained undefeated with a 2-0 record, including Park Place who was led by tournament scoring leader Facundo Pieres with 18 goals. Following closely was Emlor’s Agustin Merlos, scoring 15 goals to also push his team into a shootout for a place in the final. However, in Thursday’s shootout, Thai Polo’s duo of Alejandro Muzzio and Rufino Bensadon defeated Emlor, and Monterosso’s Ignacio Toccalino and David Stirling bested Park Place to book their spot in Saturday’s final. 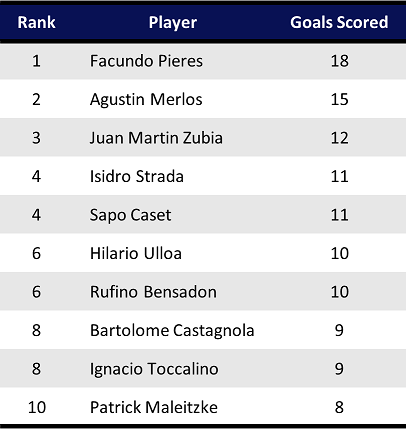 Entering the Justerini & Brooks Prince of Wales Trophy with a 21-goal handicap, Thai Polo excelled with a balanced line-up that finished league play with the largest margin of victory, defeating Schockemohle 10-6 and King Power 12-10. Through their two games, Rufino Bensadon, Alejandro Muzzio and Louis Hine have all provided four field goals, leaving opposing defenses stretched to cover all three attacking players on the field. Bensadon has also excelled from the penalty line, converting six of his eight attempts to provide a consistent source of offense for a Thai Polo team that begins with an advantage on handicap. Defensively, Thai Polo has been anchored by Muzzio who has been crucial in holding opponents to just 36% shooting and a tournament low 8.0 goals per game.

Capturing an overtime victory over Great Oaks LL in their opening game and a hard-fought 9-8 victory over White Crane, Monterosso enters the final experiencing the pressure of the close games seen throughout the tournament. Ignacio Toccalino has been exceptional for Monterosso, leading the team with nine goals and four assists, while shooting accurately from the field and the penalty line. Pushing the team forward in the #1 position, Alessandro Bazzoni scored the game-winning goal in the sixth chukka of their victory over White Crane to secure their undefeated record and help propel Monterosso into the shootout. Ranking third in shot attempts per game, Monterosso has been able to produce chances offensively with Stirling generating the most opportunities and providing a formidable duo alongside Toccalino.

Tune in to watch the livestream of the 2021 Justerini & Brooks Prince of Wales final between Thai Polo and Monterosso on Saturday, May 29 at 3pm. Visit https://hpa-polo.co.uk/watch-live-polo to purchase access.