The conclusion of polo’s most coveted title, the 129th Abierto Argentino de Polo HSBC played out on the famed Field 1 at Palermo on Friday, December 2, featuring a rematch of last year’s thrilling final between 39-goal La Natividad and 39-goal La Dolfina Saudi.

The intriguing match-up of father-son duo Adolfo and Poroto Cambiaso against nephews and cousins Bartolome and Camilo Castagnola, was just one storyline as Poroto Cambiaso looked to become the youngest ever champion of the Argentine Open at 17 years old. Years in the making, La Dolfina Saudi’s Adolfo Cambiaso jumped on the opportunity to win the title with his son, leading all players with 10 shots on goal as part of a dominant La Dolfina Saudi attack that heavily outshot La Natividad 32 to 12. Averaging nearly 18 goals per game coming into the final, La Natividad was limited to just four goals in the opening half, resulting in La Dolfina Saudi building a significant lead. Despite the best efforts of leading scorer Camilo Castagnola, La Natividad was unable to pull any closer, matched in each of the final four chukkas, as La Dolfina Saudi celebrated the momentus 13-9 triumph for their 15th title since their creation in 2000.

Controlling possession in the opening chukka, La Dolfina Saudi relentlessly pressured the La Natividad defence, collecting two Penalty 2 conversions off the mallet of Poroto Cambiaso. Adding his third goal of the match to begin the second chukka, Cambiaso extended the lead to 3-0 with La Natividad yet to find the goal. Camilo Castagnola scored in the final moments of the second chukka to end the nearly 15-minute drought to begin the match, leaving his team trailing by two. The pace picked up significantly in the third chukka with six goals scored between the two teams. Converting on both of his penalty attempts, Castagnola helped bring La Natividad within one, but Juan Martin Nero came forward from the back on two different occasions to ensure La Dolfina Saudi remained ahead. Finding success with that strategy, Nero continued to press up, as La Natividad struggled to contain the 10-goaler, who added the only two goals of a decisive fourth chukka, that separated the two teams and left La Dolfina Saudi leading 8-4 entering halftime. 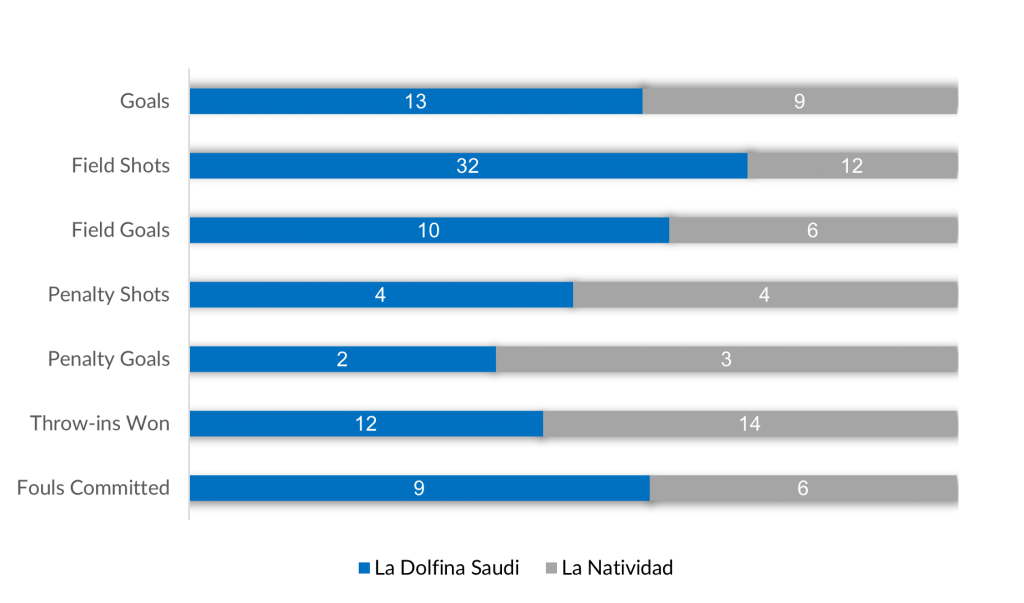 The organization of La Dolfina Saudi’s defence continued to play a factor in the early stages of the second half as the potent La Natividad attack was limited to just one shot attempt and one penalty, preventing any string of goals that would allow their opponents to pull closer. In one of his strongest showings of the year, Nero once again struck for La Dolfina Saudi, scoring his fifth goal of the contest to maintain the four-goal advantage. Outshooting La Natividad 9-2 over the following two chukkas, La Dolfina Saudi kept the ball in the attacking half and despite converting just one of those attempts, they inched closer to the end of the game without La Natividad mounting a response. A scoreless seventh chukka left the defending champions desperate for offense with time running out, turning to top scorer Camilo Castagnola for back-to-back goals in a span of two minutes to suddenly bring his team within two. The wealth of experience from La Dolfina Saudi shone through as David Stirling scored his lone goal of the match and in a fitting conclusion, Adolfo Cambiaso secured the title with a final goal to claim the 13-9 victory and raise the title with his son.