The inaugural Gauntlet of Polo™ began at the International Polo Club Beach with the opening round on Thursday and Friday with 16 teams in action. With four games each day in the single elimination C.V. Whitney Cup, the tension in every game drew the excitement from spectators on hand.

The C.V. Whitney Cup began with a battle among Pieres’, with Pilot’s Facundo and Gonzalito Pieres getting the best of Aspen’s Polito Pieres in a thrilling 12-11 victory. After Pilot raced out to an early lead, Aspen fought back behind the efforts of Pilot Pieres, who finished with nine goals in the game. With time expiring and the score tied at 11, Facundo Pieres got fouled inside the final 30 seconds, leading to a penalty 2, which he converted to send his team into the second round.

Reigning U.S. Open champions Daily Racing Form took on a young Stable Door Polo team in an exciting match that saw a fast-paced back and forth style of play. Fresh off their experience in the Argentine Open, Agustin Obregon and Jared Zenni produced exceptional performances, but it was Geronimo Obregon who led the way offensively, finishing with six goals on impressive five for six shooting from the field. After the teams were tied 7-7 at half, Daily Racing Form would score five of the next six goals to take a large lead and ultimately hold on for the 12-8 victory.

Coming over to the USA after a successful season in the UK that saw them make the finals of the Cartier Queen’s Cup, Park Place produced a strong debut against Coca-Cola. Their defense was strong throughout the game with Tommy Collingwood playing a disciplined #4 position. The duo of Nico Pieres and Juan Britos worked well together with Pieres finishing with five goals in the contest. The low-scoring affair saw Coca-Cola held to just two goals over the first four chukkers, while Park Place extended their lead to four. Coca-Cola had their opportunities in the game but shot just 1 for 6 from the penalty line in the 10-7 loss.

The final game of the opening day produced one of the most exciting finishes, with SD Farms completing an impressive comeback over Tonkawa. Building a lead behind Sapo Caset’s nine-goal performance, Tonkawa were able to overwhelm the SD Farms defense throughout most of the game. Finding themselves trailing by four goals, SD Farms would finish the game scoring six of the final seven goals, led by two goals in the final chukker from Peco Polledo. A final game from substitute Timmy Dutta sealed the comeback and completed the upset over a Tonkawa squad that seemed determined to run away with the game.

With the first four quarter-finalists determined, the attention turned to the second slate of four games. Fresh off a semi-final appearance in the Ylvisaker Cup, La Indiana produced one of their best performances of the year in the 12-8 victory over Santa Clara. Adding Tomas Garcia del Rio to the roster, he provided a playmaking presence that served La Indiana well in the game. With the freedom to attack forward, Facundo Obregon had a strong game, finishing with five goals to lead all players in the game. Shooting an effective 8 for 14 from the field, La Indiana finished with the convincing victory in a strong team performance.

The first overtime game of the tournament saw Las Monjitas get challenged by Iconica, surviving a late comeback with an overtime penalty conversion to claim the victory. After a low-scoring, even first half, Peke Gonzalez scored three goals in the fourth chukka to push Iconica into the lead. Las Monjitas quickly responded as Hilario Ulloa, Francisco Elizade and Matt Coppola worked well together to give their team a two-goal lead. After a late goal from Matias Magrini sent the game into overtime, less than a minute was needed when Elizalde converted a safety for the 9-8 victory.

The two remaining games of the day saw Cessna Polo Team display a good defensive effort in the second half to defeat Postage Stamp Farm. After a quiet opening two chukkers, Postage Stamp Farm’s Annabelle Gundlach scored three goals in quick succession to give her team the lead. Cessna fought their way back into the lead with Felipe Marquez and Felipe Viana leading the way offensively. Postage Stamp Farm had their opportunities to tie the game, but converted just two of their seven penalty attempts, resulting in the 9-7 defeat.

With just one spot remaining in the second round, Equuleus overwhelmed Old Hickory Bourbon over the final three chukkers, holding their opponents to just one goal during that span. The Laprida brothers Inaki and Magoo worked seamlessly together with Mariano Gonzalez effectively manning the back of the game. Miguel Novillo Astrada had a good three-goal performance for Old Hickory Bourbon but it wasn’t enough to overcome the organized Equuleus side, who claimed the 9-6 victory.

The quarter-finals began on Sunday, with one game, while the remaining three will take place on Monday. The first quarter-final came down to the final seconds between Las Monjitas and Park Place, with the final buzzer going just a second before the tying shot went through the goal. Park Place raced out to a 4-0 lead, but Las Monjitas responded with five straight goals to take the lead. Evenly matched the rest of the way, Las Monjitas generated their offense from the penalty line where Francisco Elizalde finished a perfect 6 for 6. Trailing by one with seconds remaining, Juan Britos picked up the ball inside the 60-yard line, but time expired just before he took his final shot that ultimately went through the goal, but was too late as Las Monjitas survived, claiming the 10-9 win to reach the semi-finals. 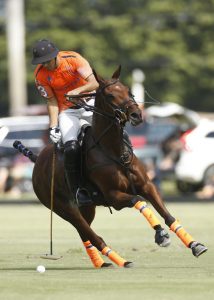