Searching for a ninth consecutive title, La Dolfina Saudi Polo Team were against a new opponent in the Hurlingham Open champions La Natividad, who were competing in their first final on the hallowed Palermo Field 1. Facing his nephews in Camilo and Bartolome Castagnola, Adolfo Cambiaso produced a spirited effort with six goals and two assists, but the young duo for La Natividad emerged into the spotlight. Combining for 12 goals and five assists, including perfect 4 for 4 shooting from the penalty line, the Castagnola brothers propelled La Natividad ahead early in the match. Behind accurate 61% shooting from the field, La Natividad never trailed in the match to hold off a late charge from La Dolfina Saudi Polo Team and claim the historic 15-13 win.

Immediately rising to the occasion, Bartolome Castagnola opened the scoring just 52 seconds into the game to give his team the 1-0 advantage. While nerves may be expected given the magnitude of the situation, La Natividad pushed forward in the remainder of the first chukka with a second goal from Bartolome and a Penalty 2 conversion from Camilo Castagnola resulting in a 3-1 lead. A quick pace was set for the remainder of the half, beginning with two goals from Cambiaso to bring La Dolfina Saudi Polo Team even before the end of the second chukka. In arguably the most decisive stretch of the game, La Natividad finished the first half on a 5-1 run, as their relentless pressure on the attack resulted in three penalty conversions for Camilo Castagnola. La Dolfina Saudi Polo Team’s potent attack was limited to just one field goal from Alejandro Muzzio, playing in place of the injured Diego Cavanagh for the third straight game, leaving La Natividad ahead 9-5 at halftime. 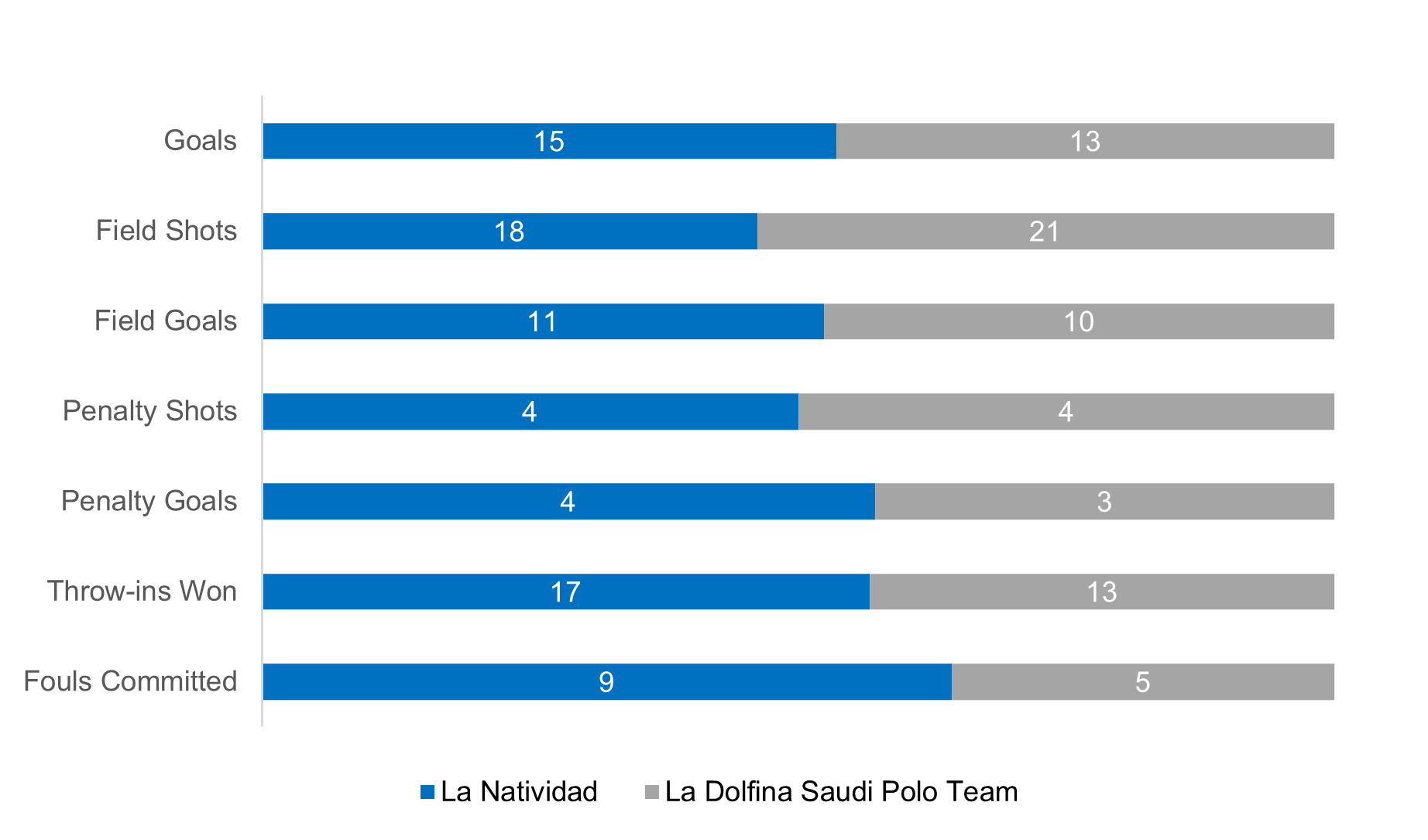 Displaying urgency from the opening place of the second half, La Dolfina Saudi Polo Team pressed toward La Natividad’s goal, but converted just two of their eight attempts to begin the half, allowing La Natividad to maintain the difference on the scoreboard. Each goal from La Dolfina Saudi Polo Team was met by a response from Camilo and Bartolome Castagnola, while Ignatius Du Plessis continued to anchor the defensive effort and keep his team ahead. Scoring two goals in quick succession to begin the seventh chukka, David Stirling and Muzzio brought La Dolfina Saudi Polo Team within two goals as the pressure mounted. However, Bartolome Castagnola provided a field goal and quickly found space on the following throw-in for a second goal to grab the momentum back and restore the four-goal difference. As he has done numerous times throughout his career, Cambiaso produced an astounding comeback attempt by converting two penalties and adding a field goal in the span of one minute and 13 seconds to quickly bring the score to 14-13 in favour of La Natividad. With the game up for grabs, the final moments would decide the champion and with two minutes remaining, Camilo Castagnola’s sixth goal extended the lead to two. Preventing any further shot attempts from La Dolfina Saudi Polo Team, La Natividad celebrated their first Abierto Argentino de Polo title with the unforgettable 15-13 win. All four La Natividad players capture polo’s greatest trophy for the first time in their careers, including Polito Pieres in his sixth final, completing a memorable 2021 Triple Crown season.